EXPERIENCE VS IDEAS:
A union board director says ground staff must be included in efforts to improve safety as rail incidents still occur

While smooth travel was reported across the country, despite a Taiwan Railway Administration (TRA) strike yesterday, Transport and Communications Minister Wang Kwo-tsai (王國材) said his ministry and workers’ unions share the goal of improving the TRA.

Around 13,000 of the 16,000 TRA workers took a Workers’ Day holiday yesterday to protest the government’s plan to corporatize the rail agency without first negotiating with staff.

Station staff said most people seemed prepared for the service disruption, as only a small number arrived at stations unaware of the service suspension.

At a protest on Ketagalan Boulevard in Taipei yesterday, the TRU said TRA ground staff should be included in the government’s efforts to improve rail safety.

Wang said his ministry and workers’ unions share the goal of improving TRA and providing people with safer and more punctual train service.

“We hope the two sides can come to a consensus with more communication,” Wang said during an inspection at the Taitung train station.

At the protest, TRU President Wang Chieh (王傑) said that although President Tsai Ing-wen (蔡英文) has encouraged workers to speak out if their employers continue to ignore their demands , and said the welfare of the workers still depended on her. Keep in mind that the government has yet to respond to TRU demands for comprehensive security reform. 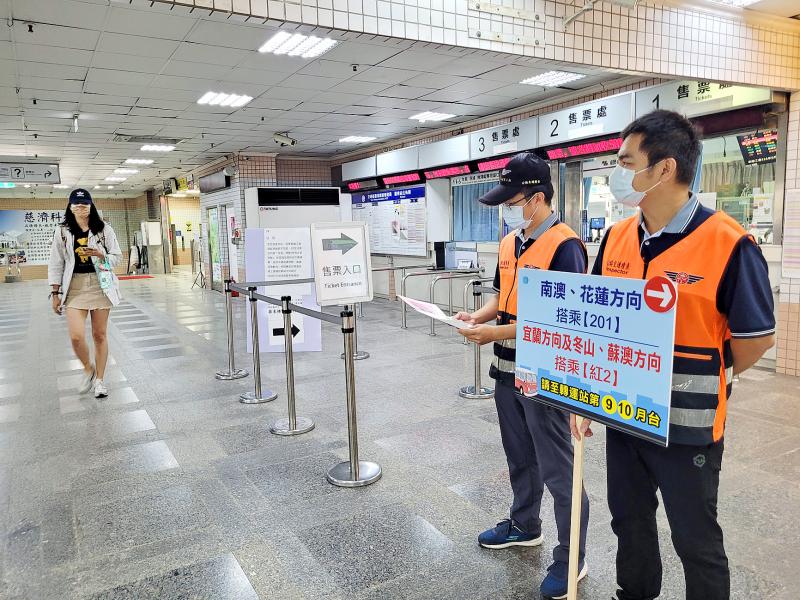 “We do not oppose the plan to corporatize the TRA, which was proposed following two major fatal derailments,” he said. “We want safe rail service the most, but the government continues to stigmatize employees who don’t work on International Workers’ Day.

Although the TRA told the public it had put in place a safety management system to ensure safe rail service, no frontline TRA workers were involved in setting it up, said TRU Board Director Liu Chung-shu (劉仲書).

“The system has also increased the paperwork that workers have to deal with on a daily basis. This only underscores that it never occurred to the TRA that it needs to fundamentally overhaul its safety standards to run a modernized railway operation,” Liu said.

The TRA blamed its workers, whose reluctance to enforce safety rules explains why there is no progress in safety reform, he said.

“Any systemic change will only increase the risk of workplace safety hazards if made without first communicating with employees at ground level,” Liu said. “If the agency has made substantial progress in safety reform, how do you explain the many train incidents that still occur?”

Despite the strike, TRA rail lunch boxes remained in high demand yesterday, selling out at 12.30pm.

“Tears of Taroko”, a group formed by families of victims who died in a Taroko Express derailment last year, said in a statement that the TRA should abandon lunch box sales this year and instead focus on provision of a safe rail service.

“The government, the Legislative Yuan, experts and family members of the victims should jointly push for institutional reform of the agency to ensure that security procedures are scrupulously carried out,” he said.

The group also endorsed the government’s plan to transform TRA into a corporation.

“While one cannot equate the corporatization of TRA with safety, it is an opportunity to change the culture of the agency and address the issue of unequal division of labour,” the group said.

Comments will be moderated. Keep comments relevant to the article. Remarks containing abusive and obscene language, personal attacks of any kind or promotion will be removed and the user banned. The final decision will be at the discretion of the Taipei Times.

Power Buyer Homeward cuts an additional 25% of its staff